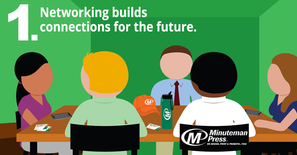 1. Networking Builds Connections For The Future.

Though there can be immediate results such as getting new orders quickly from willing business partners, networking really builds a stronger foundation for the future by establishing meaningful connections today. For example, the more networking you partake in, the wider and deeper your network will grow.

PRO TIP: Make sure you are in the RIGHT networking groups and social media channels that work for you. Don’t just stay with a group if you feel there are not enough active participants. Go where the action is! 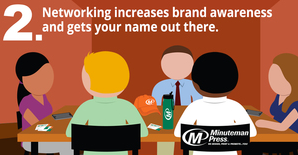 2. Networking Increases Brand Awareness & Gets Your Name Out There.

Though there can be immediate results such as getting new orders quickly from willing business partners, networking really builds a stronger foundation for the future by establishing meaningful connections today. For example, the more networking you partake in, the wider and deeper your network will grow.

PRO TIP: Make sure to LISTEN and not just talk. The same goes for social media. Be engaging and responsive, and show a little bit of the human side of who you are. Then, after listening and when the time is right, explain how you can help. 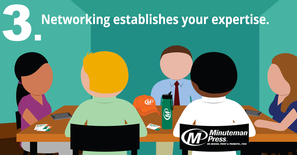 Networking also serves as a useful tool in establishing your expertise in your field. The real beauty of networking is in the conversations and relationships built up between individuals. When these conversations are used as a time to discuss the importance of your work, networking establishes a foundation of expertise. When you or your business serve as an expert in the community on an issue, potential clients will be much more likely to try out your services, because they believe in you as a reputable resource and potential trustworthy business partner.

PRO TIP: You can further establish yourself as an expert by showcasing samples of your work along with testimonials and reviews from your clients. Make sure you ask for and keep track of your online reviews as well! 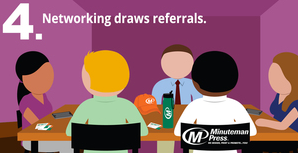 Similar to getting your name out there, networking is a useful way to draw referrals. Whether those referrals act as employers, employees or clients—networking establishes a system of referrals. As more and more people get to know you or your business on a personal level—literally the very employees within—they will feel more connected and more likely to refer others they know to you.

PRO TIP: Say thank you and reward your loyal customers when they generate referrals for your business. That will only help motivate them to continue to recommend you and your business. 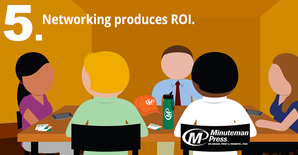 Finally, one of the greatest components of networking—it produces ROI, or return on investment. The more time you invest in networking opportunities or groups, the greater your return will be. It’s no wonder businesses, corporations and even professional individuals strongly encourage networking, and you can adapt these same principles as well.

Ultimately, when it comes to promoting you or your business, networking and social media are powerful tools for word-of-mouth marketing. Whether online, in networking groups or at a networking event, you can build sustainable relationships with other individuals, and establish your business as a focal point of the community.